An elegant species of bird, with pale blue-grey plumage becoming lighter at the forehead and darker at the wing tips. The wings resembling almost black plumage, are often mistaken for long tail feathers but on the contrary the tail feathers are very short. They are equipped with long legs, allowing them to move gracefully through grassland and wade through water.

Their distribution is not very wide, with the main population staying within South Africa and a small population living in Namibia. They do not migrate long distances and have seasonal movements that occur within South Africa. Frequently seen in grassland and farmland habitats with a close water supply, such as a dam. It is only fair to say this paradise crane had to be the National bird of South Africa.

Do not ever be fooled by beauty, this bird has rather a vicious streak and can be bushy and quite aggressive towards people. In the wild they will fly off, however the tables turn when they are raised by people or often fed in a routine, can make them quite aggressive if they feel threatened or do not receive what they are looking for such as food. Even non-predatory animals during the nesting season will get the full wrath of a nesting couple for no reason other than being in the vicinity. During non-breeding season they relax in social groups, by early October, when courtships take place, pairs start to go there separate ways where territories are defended. 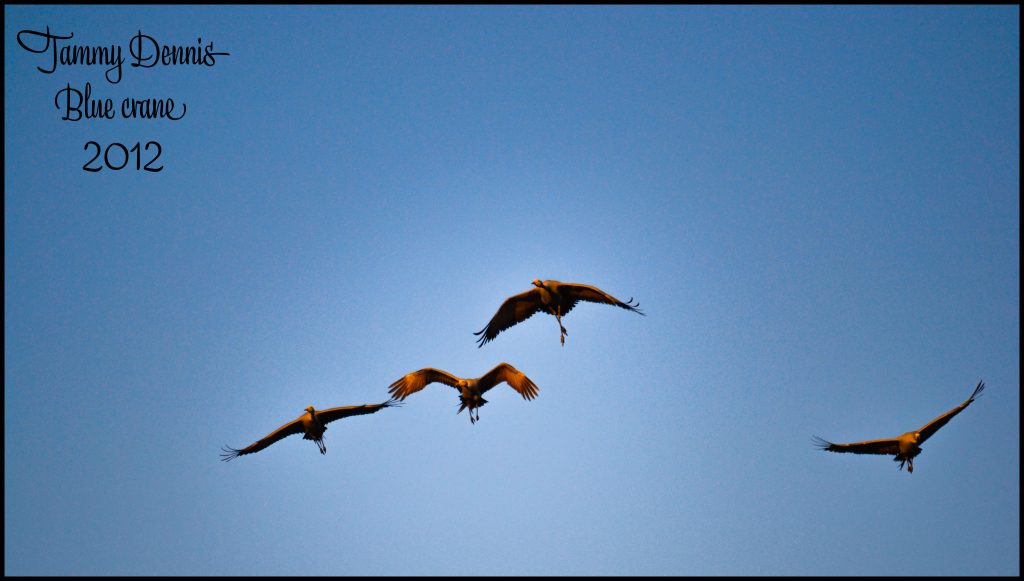 Blue cranes are elaborate birds in many aspects of their lives; courtship dances where males begin to throw items from the ground in the air followed by jumps, a female will copy the male once she has selected the one of choice, this happens at around 3 – 4 years of age once the birds reach sexual maturity. Once a pair has bonded it is a lifelong commitment, except under rare occasions where one partner dies and a new partner will be chosen.

As a protection mechanism the parents will use their wings, lower the head and stumble along the ground, acting as if they are injured and putting on a believable display; I was fortunate to witness this on many occasions, my favorite being at Kragga Kamma game park with young cheetahs. They are quiet birds outside the breeding season, being more vocal during breeding months. The vocals are hard to describe, it is a series of low raspy sounds that are very distinctive once you have heard it.

The chicks are very interesting, resembling that of a slightly elongated gosling, they grows very fast and become more gangly by the day; becoming recognizable as blue cranes at around 2 – 3 months old. The chicks (usually 1 – 3, average 2) are a strange combination as they look similar to a gosling being able to walk and leave the nest soon after hatching and can even swim in water in order to be protected from danger. They are fed by the female and are not entirely capable of feeding themselves in the early stages like most precocial young that are more independent and often feed themselves with the parents help or instructing the food types to eat. 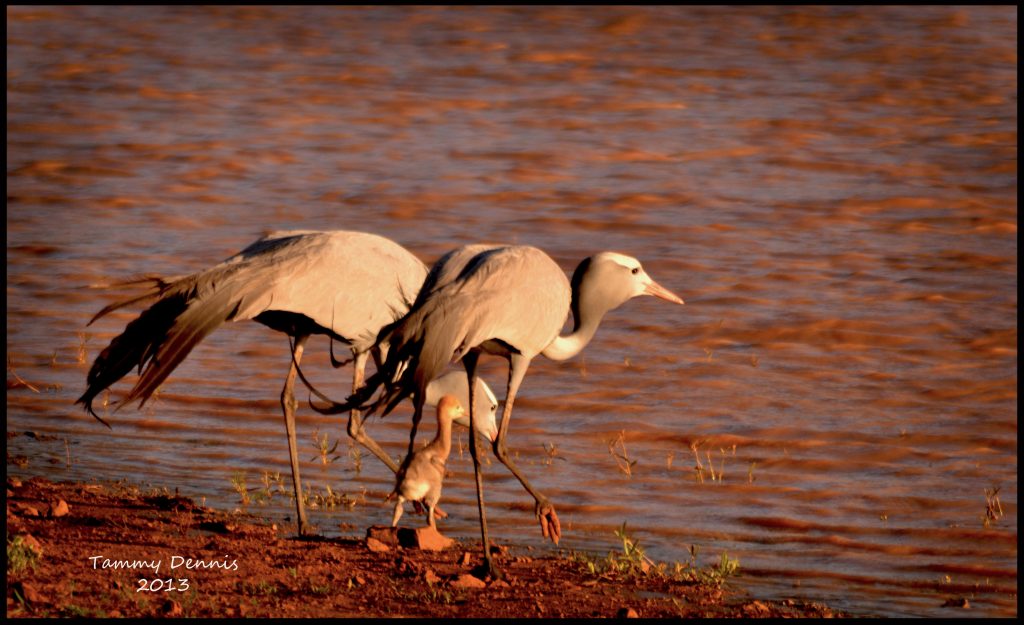 The sad part is that this bird is in a huge decline with the same habitat that is helping them breed! Farms are perfect breeding areas for blue cranes with open grassland fields and water sourced dams making for the perfect habitat for breeding pairs, the trouble comes into play when juvenile birds learn to fly and get entangled in fences and power lines. Another large contribution to this decline is poisoning, mainly poison baits put down for other species but get consumed by the blue cranes when feeding off insects on the poisoned carcasses.

Currently there are 25 000 individuals and listed as vulnerable. The hope is the population is stable with knowledge being spread about this national bird and with more care taken overall to protect it, the population might soon increase. There is no sight like a dance of blue cranes flying over with their stunning outlines and their distinctive noisy calls.