They are often so hard to spot around the foliage and easily overlooked, with their placid nature and all-round integrating interest I find them irresistible to watch. The way they can look around with each eye independently, change colour and their long sticky tongues, they seem alien and unlike most animals with all these unusual traits, however it makes sense and why don’t many other species carry these remarkable traits too.

Chameleons vary greatly in size with the smallest only measuring an inch to others that grow to almost 30 inches, with the smallest one, Brookesia micra found as recent as 2012. I was surprised to find that most species live in Africa, specifically Madagascar ( a relatively small island compared to most countries) holding 40% of the species of chameleons, that’s incredible. 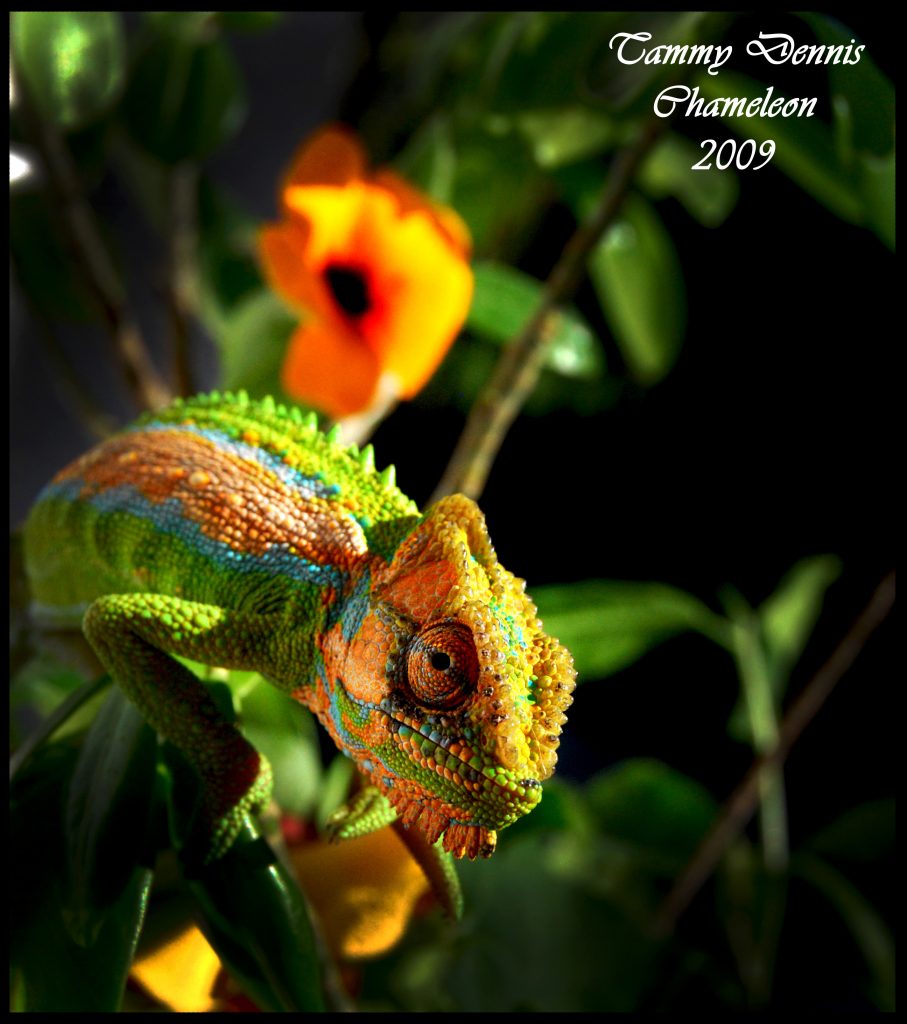 They are set apart from most other lizards or reptiles with a wide range of very distinctive features like having zygodactyl feet, extrudable tongue, eyes work independently from each other, most have a prehensile tail, they can change colour, many have spikes, helmets and horns. Chameleons also have an unusual walk swaying back and forth, this isn’t fully understood and only thought thus far is to add to the camouflage and mimic the movements of a leaf. Unlike their close looking relatives the lizards and geckos, chameleons are not able to regrow their tails.

Their colour changing capabilities depend on the species with some able to change shades of colour and others changing dramatically. These are possible with special guanine crystals that reflect colours by the chameleon changing the space between the skin and the crystals, shortening or increasing the length allows different colours to be reflected. Colours are not only for camouflage, but also used for communication or state of mind, an example is a stressed or angry chameleon can turn pitch black or showing off to a rival may radiate more colour.

They feed primarily off insects, using a specialised tool, their projectile tongue. The tongue is usually almost double the length of the chameleon’s body (excluding tail), with sticky saliva that is spat out at a speedy rate catching their prey before they even know what hit them. If you ever get to witness this remarkable talent, it’s remarkably fast. Photographing it was a huge challenge often bug and chameleon in the same picture frame and the next picture only a chameleon as if nothing ever happened.

The breeding is rather interesting, most chameleons lay eggs being oviparous, whilst there are a few that are ovoviviparous, meaning they incubate their eggs inside their bodies hatching inside the mother they are given birth to live young, the difference here in a normal live pregnancy like mammals where the placenta is attached to the mother for nutrients, with ovoviviparous the placenta is not attached to the female but feed off a yolk sac just like a birds egg.

I remember as a kid, we had a yesterday, today and tomorrow plant below my bedroom window and for an unknown reason the chameleons loved it and there were always at least one if you looked carefully I must have spent so many hours looking at this tree, also collecting chameleons I’d find on the road from school and put them in the tree out of harm’s way. Numbers had started dropping over time due to lack of food for many bird species like crows and starlings, many road fatalities and domestic cats. This makes me get a bit overly excited seeing them when I do.

I think I am lacking in the amount of species I have seen and currently am convincing myself it’s a good reason to visit Madagascar and investigate for a few more species. The most common I have seen is the Cape dwarf chameleon that is restricted to the region around Cape Town. 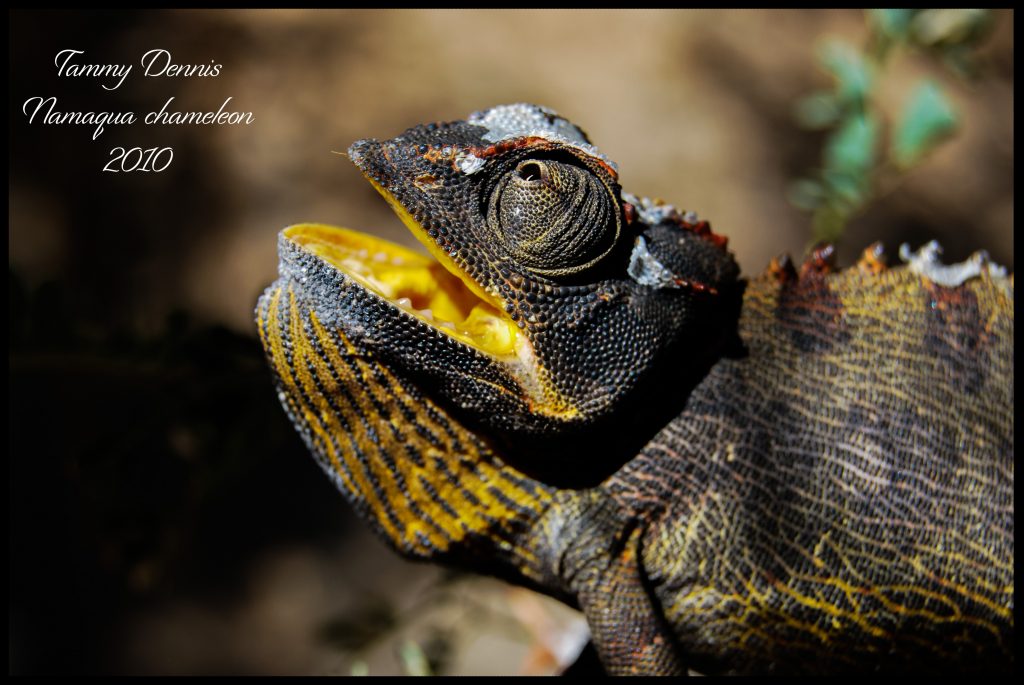 The other is one of my favourite experiences, the Namaqua chameleon. This chameleon lives in the desert areas mainly in Namibia and South Africa. It has a bold personality and not afraid of standing its own ground with scary hisses, wide threatening gape with bold yellow and black skin that grows dark with anger. This chameleon uses its colours as an important tool for warming itself in the morning and cooling itself during the heat of the day, by increasing its darkness it will raise its body temperature whilst lightning itself aiding in reflecting the heat when it needs to cool itself down. 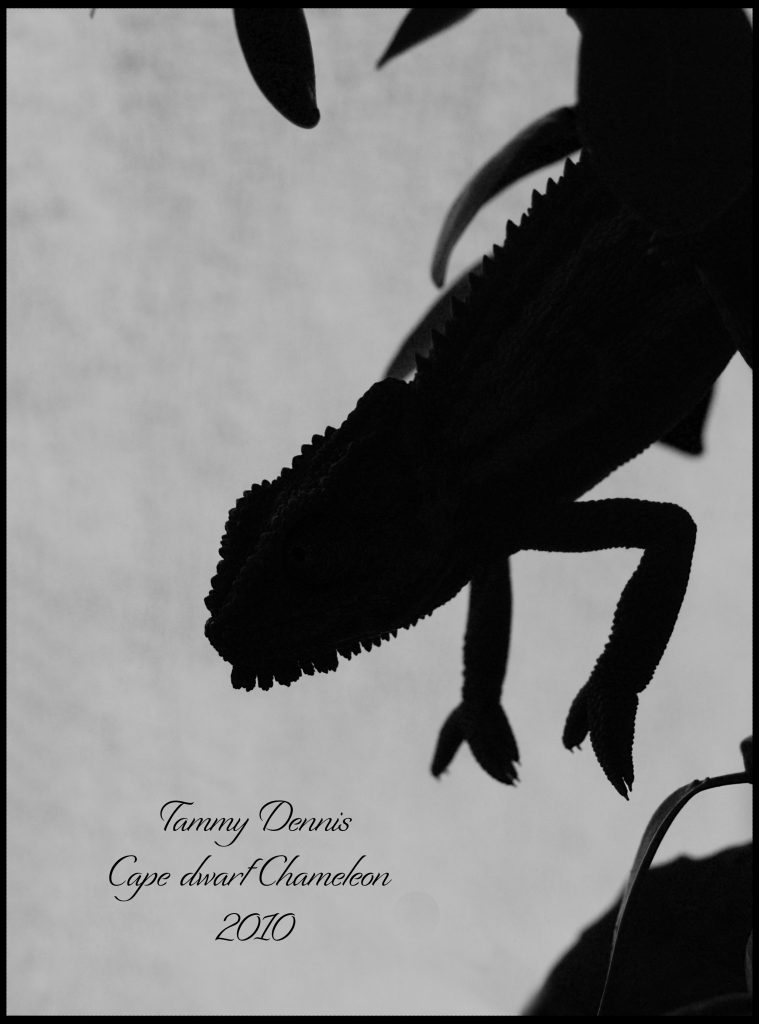 They are not uncommon pets throughout Europe, but special care must be taken when looking after these delicate creatures. Many are threatened and due to their tough nature of not being easily spotted and they are difficult to monitored they are still not fully understood.

Chameleons are unique characters, I see them as a jewel of nature, bursting with interest and colour, but to add the cherry on the top. Some chameleons even respond to UV lights, turning their bones into glowing blues, an unusual colour indeed that takes their camouflaged nature into the bold world. The bones that are close to the skin will illuminate through, sometimes giving a great skeletal x-ray picture of the chameleon.