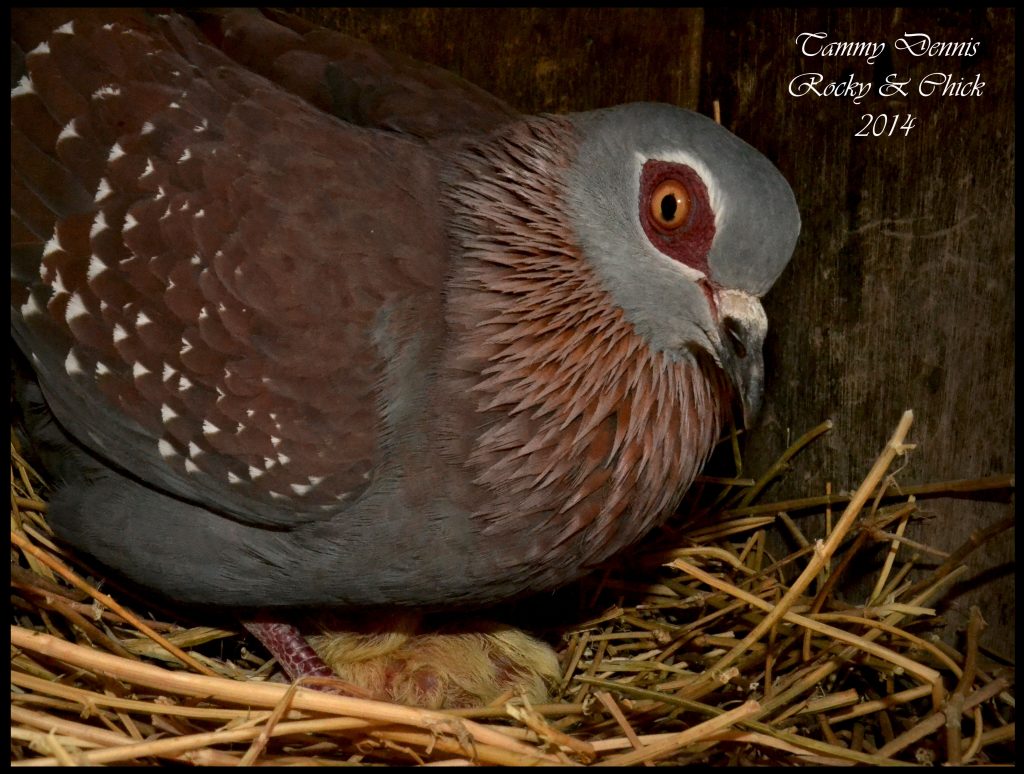 This is a rather common bird, especially around urban areas, they have done particularly well adapting to human ways of life. I find this is probably one of the prettier pigeons found further South of South Africa. With most doves and pigeons having many shades of dull colours this pigeon comprises of striking maroons, reds and purples.

Pigeons and doves are renowned as the worst nest builders of all species, they build a flimsy stick platform on sometimes the most unstable branches of the tree, the rock pigeon often chooses a more stable area such as cliff edges, buildings and caves. The male and female are very difficult to tell apart, just like most doves and pigeons however they play very specific roles, males often bring nesting material whilst the females builds the nest, when it’s time the female lays 2 perfectly beautiful white eggs. During incubation both parents will take turns incubating the eggs in shifts for around 16 days.

Often these nestlings are found fallen from the nest, being completely altricial they rely solely on their parents for survival. I have often raised them, yet I have never been good at giving them names, I often called them fugly 1, fugly 2 and so forth, because they are that ugly. They are born with dark purple skin, bright yellow like strings, swollen soft beaks and bulging eyes, a face only a mother could love. Beware, releasing is also quite difficult as they seem to act like homing pigeons and tend to not want to leave the area or change their routine.

They are fed what is called pigeon milk, which is regurgitated food and water the parents would normally consumed with secretions from the crop lining creating a semi-solid yellow cottage cheese like substance, this is very high in fat and protein, even more so than cows milk (it is very different from milk, never feed this to birds) which also contain very important immune enhancing antibodies that are extremely important in the first few days after hatching.

They can be very independent birds that stand their ground, especially with their nests, being slightly aggressive. They make a very deep distinctive doo-doo-doo sound, or whilst in flight occasionally a few loud wing beats that almost slap together, a characteristic found in many of the dove and pigeon species.

When I was growing up, it was always called a rock pigeon, in more recent years, it has become more acceptable to call it the speckled pigeon due to the white speckles found on the wings. The rock pigeon is currently the name of the feral pigeon that are domestic homing pigeons that have now returned to the wild. These two species have a lot in common, homing pigeons being bred from the speckled pigeon many years ago and the two will readily interbreed today, causing the natural species to change over time.