I have been meaning to write this for a while, even before the trip I have been brainstorming a few ideas on how to jot it down onto paper for all to read. Although it would be a lengthy one post it was going to be in one post, now I am a little worried as this might become an encyclopedia of Iceland as this so-called little island is jam packed full of greatness!

How I chose this trip started with trying to find puffins, my original plan was to go to the Faroe Islands. The Information I was gathering didn’t seem great travelling alone without a car, to somewhere that needed many transport transfers to the top of Scotland and hire a car to be ferried across, it all didn’t seem worth it. Till I saw Iceland popping up regularly when researching more about the puffin, diving deeper I found out Iceland was a photo paradise and decided this is where to go, a good friend I met decided to go with me. Last year we had flights booked and due to unforeseen medical problem the trip fell through, however I couldn’t get Iceland out my mind and decided to go this year, no regrets!

I will also be including a breakdown of what the trip costs in a later article, as it is said this was an expensive country.

An early wake up was required to get to the airport for a 06:00am departure, arrival into Keflavik international airport, to an exciting new country. I rented a car from Go Iceland a cheap city car with insurance, they picked me up from the airport and it was a quick 30 minutes on paperwork. The nervous part was getting in the car and working out the new side of the road, getting to the main road and out towards my first stop that was an unexpected scenic route helping me get the hang of it all. The stops for the day in order:

Bridge between continents, I didn’t quite get the hype. I understood it’s a fissure and the two plates continuously moving away and the bridge represents the connection of Eurasia and North America. It was beautiful, however it seemed like to small cliffs with a dry river in-between.

Brimketill lava rock pool, is very contrasting with black lava rock and blue ocean, with white water crashing over making a relaxing and mesmerizing combination. At a closer inspection I was surprised to see thousands of small snails, ranging in many different colours, making a fierce picturesque place seem so delicate all of a sudden.

Three stops I had I later found were not accessible to my little car and had to give them a skip, Katlahraun lava, Krisuvikurberg cliffs and Selatangar. 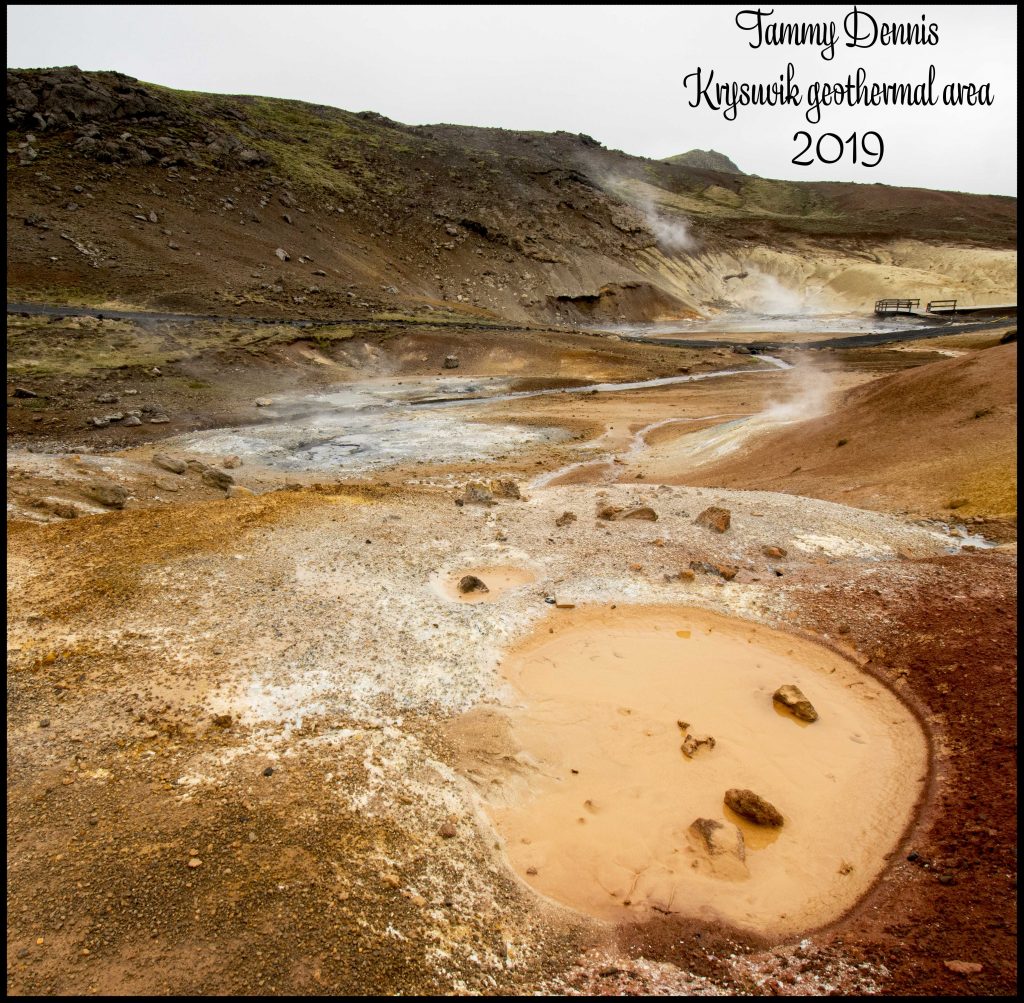 Krysuvik geothermal area, inside the car watching the steam rise up was very interesting and never previously witnessing something like this before. I was rather eager to experience it, well, you only need to open the car door to experience step one. A whiff of easily a million eggs hits you as someone opens their lunch box, the sulphur compounds released from the earth’s surface. The Iceland I had seen so far was quite barren with low shrubs over the dark landscape, however here it changed to desert like, with the sand waving in soft changing colours of greys, rusty reds and yellows as the steam raised and ponds bubbled with boiling liquid filtering out rich crystal-clear waters. 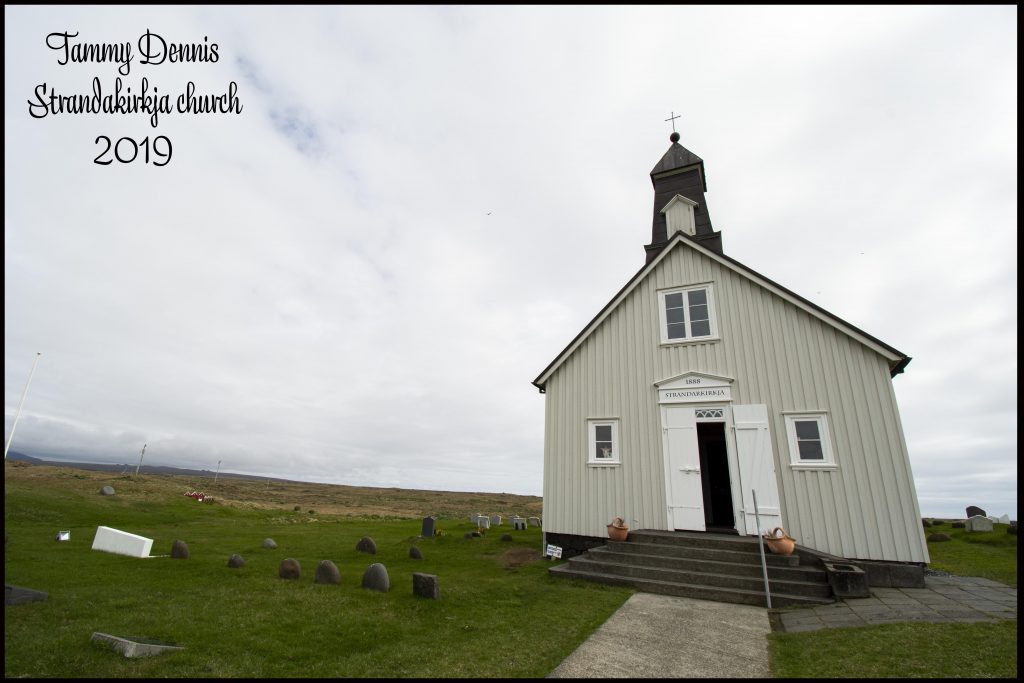 Strandakirkja church, built originally in the 12th century, it was small and simple blending into the general architecture of Iceland, after a quick look I got very distracted taking photographs of a bird. The bird was making a sound I had heard all day and couldn’t put my finger on it, later seeing a small brown bird with a long beak. It flew up, fanned its tail feathers while making a quick turn dive causing a low beating drum sound, from the photos I noticed it had 2 extra side tail feathers I was sure it used to make this sound. I spent almost a week trying to identify it, the common snipe, apparently also a warm welcomed bird of Iceland as it symbols the start of summer. 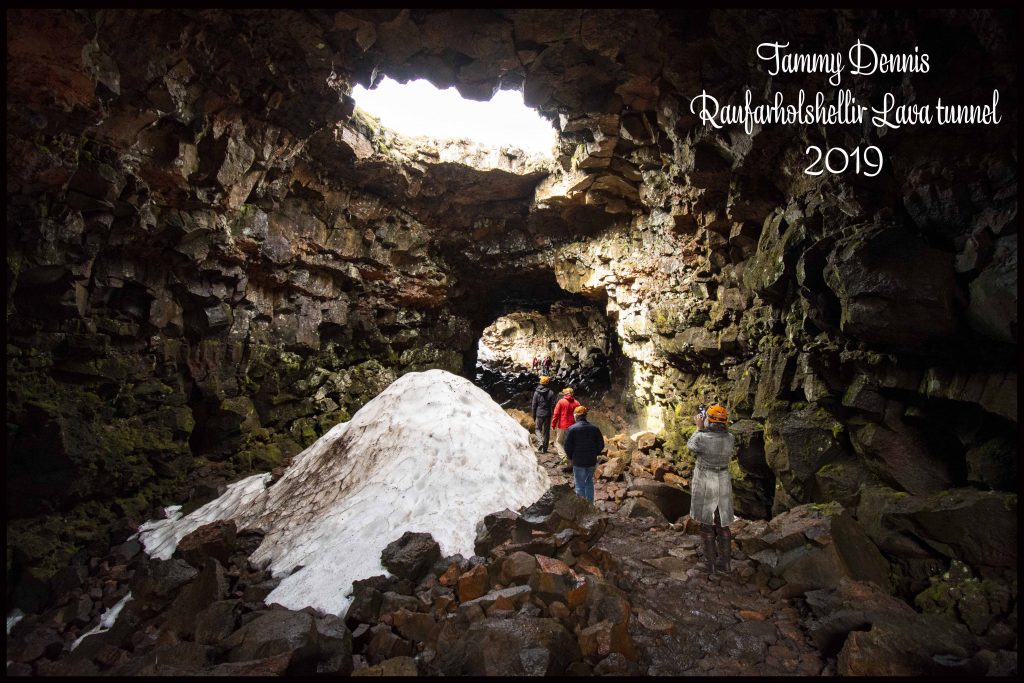 Raufarholshellir Lava tunnel, this was rather an odd experience, as it was a new world in itself. Starting with a normal cave, however with skylights and packed snow that had gotten through, this was a lovely sight, as this time of year there wasn’t much snow. As you go deeper into the cave the temperature does start dropping dramatically, and with this icicles form, this isn’t around all year as they start to melt and eventually disappears, and will reform once the weather starts to cool later in the year.

Kerid crater, this 3000-year-old volcanic crater is surrounded by a rich red colour with a unique shade of aqua marine blue waters, this is due to the minerals from the soil. The photo doesn’t quite do it justice and nor did the ever changing overcast weather at this point highlight the wonderful colours.

Secret lagoon, these hot springs are dotted around all over. Therapeutic springs where you can soak and relax in naturally rich waters. The secret lagoon has been kept very basic, with steam rising from other springs and streams surrounding the main lagoon, with a little Geysir that erupts every few minutes. Be prepared to strip down, as Icelandic people seem to have no body shame like some other countries and before you take a dip you need to give yourself a good wash down in a prison like shower before getting your swim trunks on and relaxing. I would have bailed out if hadn’t already paid the entrance fees and kept convincing myself as it was my birthday suit, i might as well wear it too.

After roughly 300km, I ended my day at Bakki hostel, it’s very up to date, clean and fully equipped, topping it off with very kind staff. The location was great, walking distance to the ocean, petrol station next door with a corner shop.

This night in particular was very highly rated for the northern lights, however I was so exhausted I slept through my alarm and missed it. I didn’t manage to see them for the rest of the trip due to cloud cover and the day filled nights, end of May is not the best time to see them, though there is a slight chance on odd occasions.