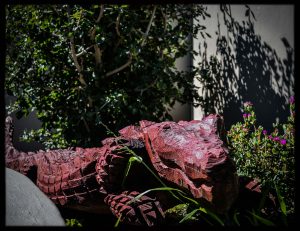 Work by any other name is still work, but if you are in the field where you want to be and aimed for, well count yourself as fortunate. Many people are forced to take jobs to earn a living just to get by, some people have jobs to do the things they enjoy in their spare time and others get to be their work.

I am one of the fortunate ones, I realised early what I wanted to do and found the right paths to achieve it, but even then, every job has dull, frustrating and boring days.

This story takes place on one of those sorts of days at work. There was a new ranger boasting about his skills compared to everyone else, really young and full of ego who had just qualified. Since there wasn’t much else to do, a few of us rangers decided it was time for a little fun on such a quiet and boring day. We got together, made a plan and set the wheels in motion. The first part was calling the new ranger on the radio. Oh, how we had to keep our composure and be very serious, “You won’t believe what we have found down at the dam near reception! It’s an ingwenya”, we tend to have these code names for animals, this one meant crocodile.

The new ranger hurried down and was shocked to see in the binoculars there was really a crocodile at the far end of this dam. Which is very surprising, as this neck of the woods was not crocodile area at all. This was not the right habitat nor are they found in any proximity to this area. The new ranger thought about this for a while and suggested a few ideas how this could have happened, and eventually decided he will walk us “non-walking guides” as he knows what he is doing. The crocodile seemed docile and the ranger wanted to have a closer look without scaring it off, so there we were getting a quick safety talk what all the symbols meant, when to stop, when to go and so forth. We started sneaking up, working our way through the dense foliage. He kept telling us at the back to keep quiet as we could not help giggling under our breaths as we got closer. Finally, we got close enough for him to get a good look through the binoculars, giving us a running commentary on the situation, “I’m not sure what species this is, does not look like anything I have seen before”. At this point we were on the floor in stitches as he slowly realised he didn’t recognise the species as it wasn’t a crocodile, but a wooden statue from the lodge.

He felt very embarrassed and eventually joined in the laughing, I guess we all stick our foot in it and get caught out at some point, I know it’s happened to me many occasions. It does make for good fun and stories later, and at least this day wasn’t so dull at work after all.

Post Views: 0
Stellenbosch, A must visit The long road…