Though the name has changed to African Harrier Hawk, I still prefer calling it a gymnogene (gym-no-gene), it’s an original and unusual name compared to the new one and rolls off the tongue. I have not seen many in the wild but still rank in the top 5 of birds I have seen.

It is a rather plain bird with light  grey plumage, black tipped wings, barring on the abdomen and thighs and yellow legs and face. The beautiful part is during breeding season or excitement the face flushes red, this is where their name gymnogene comes into it, as this originates from Latin, meaning ‘bare-chinned’ or ‘bare-checked’. Males and females are very hard to tell apart with the female being slightly larger than the male, juveniles have brown plumage with dark facial skin only attaining their adult plumage at 3 years of age.

They have a wide range of prey to feed off including bats, birds, nestlings, eggs, rodents, lizards, amphibians and insects as their staple food types though have been seen eating fish, carrion and even palm fruit. This bird stands out from the rest by the way it actively searches out its prey, most birds soar in the sky or watch from a view point, the African harrier hawk however clambers through rocks, brush and even up a tree like a squirrel trying to catch its prey. Their physical build is built around this style of catching prey with very flexible wings and legs that are more rigid in other birds, being able to bend both backwards and forwards with proportionally smaller feet to allow easy access into holes, nest and other tight crevices in order to catch prey that are inaccessible to most other birds of prey.

The courtship is something very dramatic and rather spectacular to watch if you ever get the opportunity. With the male first circling the skies slowly, later the female will join in the circling and at random times she will roll over in mid-flight, so the pair can grasp each other’s claws. This seems very elegant from the ground, but I am sure in flight it must take a lot of acrobatic skills to be able to pull off, with the risk of making a mistake and plummeting to the ground.

The African harrier hawk has done well adapting to change over the years to urban and farm land, with this flexibility it has helped its species to survive without falling into the concerned category and with its specific way of hunting for prey it has avoided most of the other causes of birds of prey to be persecuted by accidentally ingesting poisoned carcasses or shot for killing livestock. 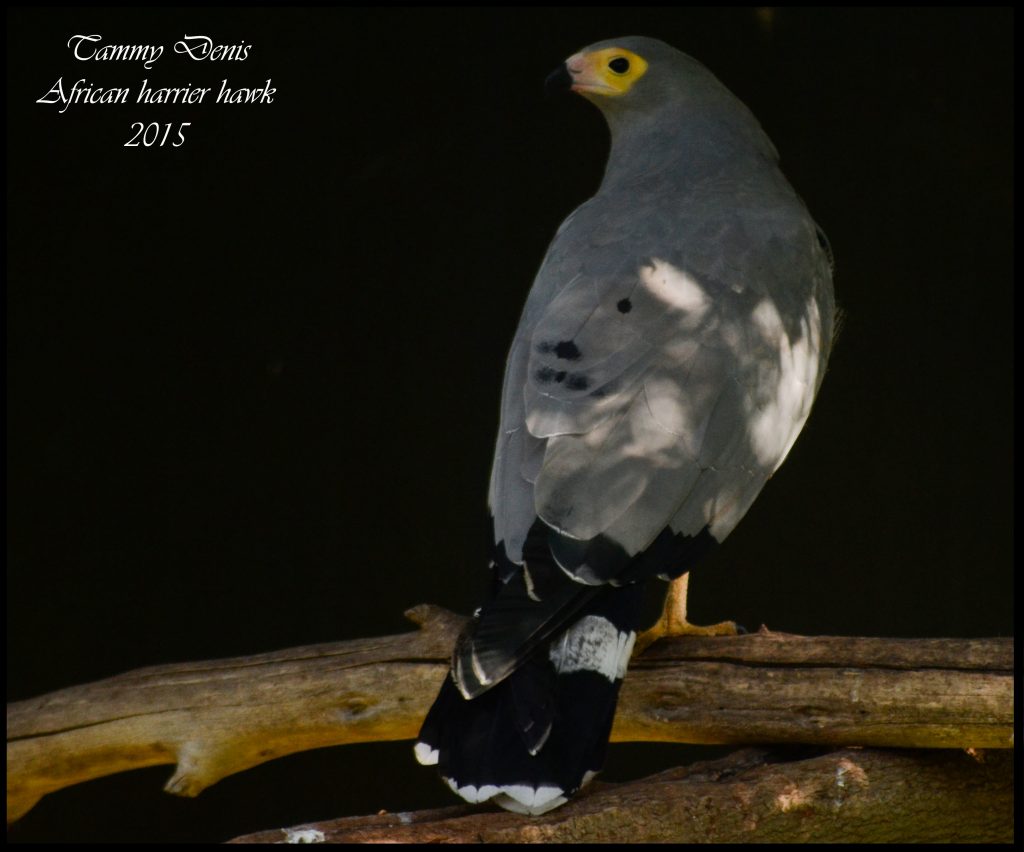 I have not had many successful attempts at taking photographs of these birds in the wild, although they do nest nearby where I lived and were always on a mission to somewhere else. I have seen them up close and learned so much about them at the world of birds where they had a pair that was fascinating to watch.