The name might seem to over promise, after all there are no giants so how on earth would they have a playground. Once your there, you will understand.

These huge cube like stones, piled on top of each other, so high it makes you feel very small. I am not just talking about one small monument that looks crazy for a bit of magical nature, it’s as far as your eyes can see. Solid square stones stacked up like lego pieces or children’s playing blocks, scattered between, there are quiver trees that are dwarfed giving the feel of a fake planned activity park. 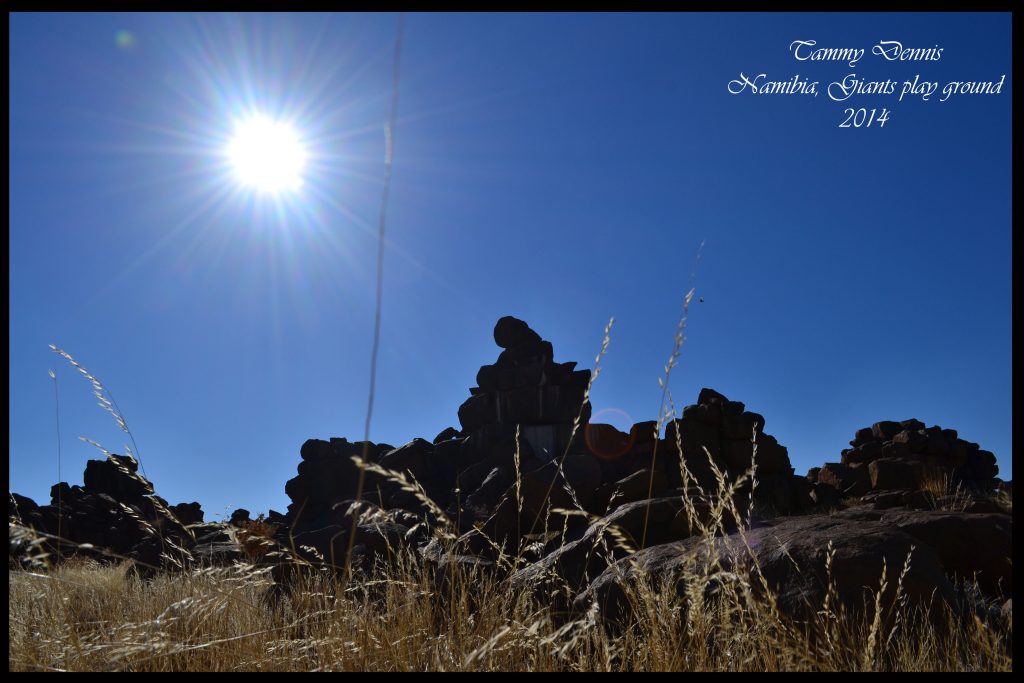 The scenery is fantastic, many photographs of silhouettes in this area really stood out, also playing with perspective photography gives an interesting feel. For those who are not camera enthusiasts, making up your own creatures or rock formations that resemble family members is also fun, and a few dinosaurs look alike can be seen.

We all know there are no giants and it’s not a playground for them, I can’t say the same for ourselves though, there is lots of fun to be had, with plenty of walking trails, seating area and those interested in herpetology can see plenty of reptiles basking on the rocks. The rocks are free to climb where ever you like, but do watch your step as the rocks are not always held together well and can be quite loose.

Some stacks of rock have been decorated with small mounds of rocks that have been layered for enjoyment. In the past the indigenous people packed rock as a sign of memorial, one of the more famous is  Haitsi Aibeb “the place where Haitsi is found”, but piles are now often said to represent the happiness of travellers who have once been.

These formations were formed 180 million years ago (known as the Early Jurassic Epoch). The tectonic plates started moving with enormous upheavals, allowing for the magma to push its way through cracks and overlying rocks. Over millions of years, gaps in the sedimentary rock filled up with rising magma, forming dykes and sills of dolerite rocks when cooled, this rock eroded away, exposing the unique square rock formations that can now be seen today. You can see these thick black lines where the dolerite has not been eroded, it is very distinct ranging from a few centimetres to 10 meters wide and kilometres in length in some areas of the word.

Absolutely incredible how a bit of melted rock, wind, water and temperature can carve out a landscape entirely unique as this. It takes your breath away that such a magnificent place can form from the simple elements of nature.

One thought on “Giants playground…”